We are delighted to announce that The Astronomers Sun picked up it's 17th award this month at the New Mexico Women in Film, TV and Media Festival for Best Editing! Now while our co-writer/director Jessica Cope is a woman through and through, our editors, Adam Kirk and Dave Long both happen to be men, which shows just how progressive this festival really is!!

The importance of the editing process in an animated film is often overlooked, so I'm thrilled that Adam and Dave has been given this recognition for their dedicated and inspired work on the film.

The 17th award marks a milestone for us and our partners at Screen Yorkshire.

Sally Joynson, Chief Executive of Screen Yorkshire says, ‘’We’re delighted to congratulate the team behind ‘The Astronomer’s Sun’, with this 17th award, making it one of the two most successful short films ever funded by Screen Yorkshire. It’s a phenomenal achievement for the filmmakers, but comes as no surprise as it truly is a stunning animation and a fantastic example of the home-grown filmmaking talent that hails from Yorkshire’’.

Camilla Deakin, Executive Producer at Lupus Films for Channel 4 said, "From its inception it was clear that Directors Jessica Cope and Simon Cartright had a singularity of vision which translated very powerfully on to the screen and resulted in a moving and mysterious film.’

It is in the editing process that a filmmakers vision is tested, refined, and boiled down and no more so than on The Astronomers Sun. We brought senior drama editor, Dave Long in early on in the scriptwriting stage, to create the animatics for the film. As a drama editor, Dave was able to bring his huge experience of cutting drama and offer practical help to Simon and Jess who were wrestling with in the script in those early days. These animatics in effect replaced the scripts our our primary tool in refining the story, which of course has no dialogue. These animatics were sent to our script consultant and executive producers in the 3 incarnations of the film we created with storyboards, temp music and effects, before being green-lit for production. 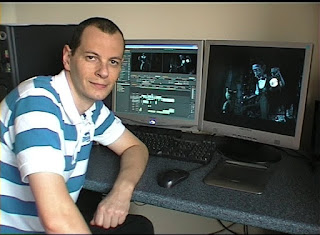 From there, Adam Kirk, took over the reigns, first in the capacity of assistant editor, but quickly rising to editor steering the film through production and into post for broadcast and festival exhibition worldwide. Not only did Adam contribute enormously to the visual storytelling of the film, he was also responsible for the stunning HD prints for cinema and web. Originally commissioned in SD, back when SD was the standard delivery format, Adam championed HD for us, and created a production pipeline to do just that. Thanks to Adam, The Astronomers Sun was one of the first short films to be mastered in the latest cinema format, DCP. Adam is now an in-house editor at Reef Television in London.

To discover more about the process of editing "The Astronomers Sun", you can read this fascinating interview with Adam Kirk.

There was another chance to view The Astronomers Sun on the big screen at PHOENIX LOVES SCI-FI festival yesterday, Thursday July 2nd. The festival brings the best science-fiction, fantasy and animated films that have been produced and/or screened in Phoenix over the last year. This was another chance to view the film in Arizona after last years Filmstock Film Festival.
Posted by David Bunting at 01:19 3 comments

I'm delighted to announce that after an amazing festival run, “The Astronomers Sun” is now available to view online!

Thanks to Adam Kirk for uploading the film to the Duchy Parade Films YouTube page in breathtaking HD, and for updating the website on which it now resides. We hope this will find a new audience, and we encourage you all to promote it and tell the world!

The Astronomers Sun has had a terrific festival run, playing in over 70 festivals around the world, and embraced both critically and by audiences and winning 16 awards to date. It’s broken Screen Yorkshires record as their most successful animated short film by quite a stretch. It’s a testament to everyone who worked on this film and did so much to make it what it is – to Simon and Jess, and the entire production team who helped bring it to the screen. Major thanks also has to go to Peter Kershaw who has along with me, been promoting it at festivals for going on for two years now and Adam Kirk who has been sending copies of the film in various screening formats to festivals around the world.

Thanks eveyone for supporting us.

The directors of The Astronomers Sun have made a music video!!

So Si and myself have been at it again. This time with me in the directing boots and Si as the writer/story board artist. We have just recently made a music video for the beautifully obscure band 'Storm Corrsion' Which is a musical collaboration between Porcupine Trees Steven Wilson and Opeths Mikael Åkerfeldt.


The video has done incredibly well and has got fans wanting some more!

If you are interested in knowing more about the production of "The Astronomers Sun", then this vodcast should be of interest. Writer/Directors Simon Cartright and Jessica Cope discuss the making of the film with me. It sounds like we recoreded it in a toilet, but it's worth a listen.
Posted by David Bunting at 08:53 0 comments

A huge thank you to the audience and jury at the Santa Fe Independent Film Festival, USA who presented "The Astronomers Sun" with it's 16th award for BEST ANIMATION last weekend. This is the 3rd award in a row from New Mexico and it's humbling to see the NM audience take the film to their hearts.
Posted by David Bunting at 12:26 0 comments

The Astronomers Sun has been selected by our Selection Committee to take part in the International Short Film competition at the 22nd editionof our Horror & Fantasy Film Festival in San Sebastián (Spain), which will be held from October 29th to November 4th, 2011.
Posted by David Bunting at 12:17 0 comments

Das Museum.BL, The cantonal museum of the Swiss canton of Basel-Landschaft have a very special 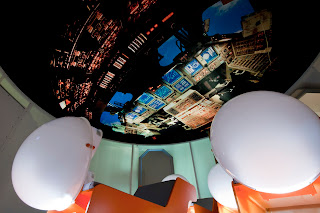 exhibition for children and families called "3, 2, 1...Start! Einmal Weltall und zurück." The exhibiton is about astronauts and the mysteries of the Universe. The Astronomers Sun is being shown in a film night film of short science fiction films. This evening will take place on Friday, 2nd of December 2011.
Posted by David Bunting at 07:30 0 comments

"The Astronomers Sun" is screening as part of the Masham Arts Festival, in North Yorkshire, Tuesday 25th October at 7.30pm, Masham Town Hall. A new film produced by David Bunting and animated by pupils at Kell Bank C.E. Primary School, especially commissioned for Masham Arts Festival "Betty & Dorothy" will also be be premiering.
Posted by David Bunting at 07:08 0 comments

We are honored to be screening The Astronomers Sun in the MASTERS OF PUPPETS retrospective of the 6thANIMEST international animation film festival, which will take place in October 7th to 16th 2011 in Bucharest, Romania. It will also be screened on the Creepy animation night of this year edition of the festival.
Posted by David Bunting at 03:02 0 comments

screening at the Santa Fe Independent Film Festival USA, on Oct. 19th 2011 and Oct. 21st night 9:00pm at the Warehouse 21 in the Taos Shortz program.

The Astronomers Sun is playing in competition at the Kavalan International Short Film Festival 2011 in Taiwan.