Well today was a huge day in any measure of a film. While I’ve been in York teaching animation to school pupils and staff from the National Railway Museum, Jess and Simon have been doing the final picture edit with our editor Adam Kirk. All through the making of this film, Jess and Simon have been working with a wide range of professionals to realise their vision. I thought it would be fascinating to share their experiences on the blog, impart to give them the credit they deserve for the miracles they are performing in the background, but also to give our readers the opportunity to discover a little bit more about the process of making a short film for 4mations Digital Shorts.

Adam trained at Yorkshire Television working in childrens, features and news. He also worked for BBC schools, Disney, Yorkshire Forward. He is currently working freelance as an Editor. 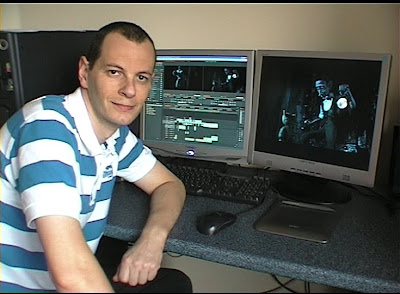 Can you explain your role as editor & How does it differ to Live action editing?
As an editor my job is split into two areas, technical and artistic. Even though the technical side is vital I won’t bore you with all details lol, suffice to say all the images Jess & Si shoot get sent to me and I convert them into standard and high definition video. Once that’s done it’s onto the artistic side of the job. Following the anamatic as a guide, I take the shots and edit them together to produce the finished scenes. Jess & Si have put so much time into the detail of the animation that the characters literally come to life on the screen. So for me, it’s pretty much exactly the same as editing live action drama. In fact I tend to forget I’m editing animation and treat the characters as real actors.

Are there any unique challenges?
Yes unlike live action editing you don’t have several takes of a shot so you can’t piece the scene together from the best takes. Also sometimes you want a shot to be longer than it is, but you have to remember that asking for additional five seconds could take Si & Jess an extra days worth of shooting! This just isn’t possible to fit into an already tight schedule.

So the best way I find is to just work with the material I have got and edit it together in the best way you can concentrating on building the characters relationships as the story progresses.

Once an edit is complete I upload it to a secure website so the entire team including the executive producers can all view the edit and make comments. This way everyone gets there say and this review process enhances the finished product.

What is it like working with Simon & Jess?
In a word “Brilliant!”. Amazingly, because we live miles away from each other and because they have had such a busy schedule, up until last week we hadn’t met face to face! All the editing so far had been done via email and phone conversations! Anyway last week I got invited over to their studio to discuss the final sequence. So having navigated the perilous steep incline of Simons driveway and parked the car making sure it was in first gear, it was great to finally meet them and see them at work! I also got to meet David Bunting, for the first time, and he amazed us all with a hand drawn animated test of one of the effects.

It was a great afternoon made even better when Jess & Si showed us the shots of the final Orrery sequence. Having edited together about a month ago some test still images of the final sequence, to send to the executive producers, it was great to see it now in motion. Simply breathtaking!

With the picture now locked, sound design can begin in earnest next week, and score finalised, and compositing and effects completed. Look out for more posts from other members of the crew over the coming weeks.
Posted by David Bunting at 12:08