David Ross used a combination of model, practical and visual effects to create the breathtaking sho 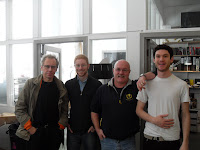 ts in the film showing the exterior of the observatory and the comets. Incredibly, David created his shots whilst studying full time at the Edinburgh College of Art. I asked David to share his experiences in working on “The Astronomers Sun”.

What is your job on “the Astronomers Sun”?

I've been using a combination of model effects, practical effects and visual effects to create the shots in the film showing the exterior of the observatory and comets.

You are currently studying animation at the Edinburgh College of Art. What is it like working on a 4mations film at college and how is it benefiting your studies?

Working on “The Astronomer's Sun” has helped me enormously. When you take on a project like this it forces you to work to a level of professionalism that you maybe wouldn't with a college project. College allows you the freedom to experiment and make mistakes and but it doesn't give you the pressures of the real world. You have a responsibility to the people you are working for to create what you say you can create and it has to live up to their vision, which is a different kind of pressure from creating something for yourself. You also end up learning a lot about certain aspects of the film making process that college can never really give you experience with. I'm sure the experience I've had working on "the Astronomer's sun" will prepare me well for my degree film next year.

Simon and Jess were students at the Edinburgh College of Art. When did you first meet and how did they approach you about their new film?

By the time I started at ECA Simon and Jess had graduated, but I saw both their degree films shortly after and I was thoroughly impressed. Later in the year I briefly met Jess at the “Young Scottish Bafta Awards” because her degree film "The Owl House" was nominated in the animation category. It was many months later though before I was contacted about contributing to the “The Astronomer’s Sun”. It was actually Steve Warne who put my name to them. I had just finished a model effects shot for his stop motion film "Savage Mountain" and I guess he saw that Simon and Jess needed similar shots in their film. Simon contacted me by phone and explained the project to me. I collaborated with Simon over the phone for a few weeks, figuring out how the shots should look and how best to achieve them. When we shot the opening shot Simon came up to Edinburgh and it was great to finally meet him and work with him direct.


Donald Hollwill is the films mentor, so it must be handy for you having direct access to him at the Edinburgh College of Art? 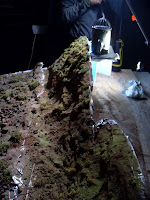 und the department from nine till five during the week so I can see him during those hours when he is available, and he has been extremely helpful and supportive. I had figured out how I wanted to create the shots, but that’s only part of it. You then have to figure out how to actually make it work and that’s what Donald was so helpful with. He is great at coming up with a variety of practical solutions to problems. There is no how-to manual for the kind of low budget practical methods we were using so it was a case of trial and error and problem solving to make them work. I should also mention that the department’s technician Neil Kempsell was an enormous help and support too. My course mate Will Anderson played a huge role in actually getting these shots done in time for the deadline because he came in to help with the compositing load in the last week and solved a few problems we were having with motion tracking. 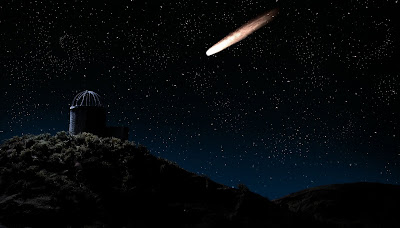 You say on your website that you try to create spectacular and convincing special effects by combining traditional in-camera effects techniques with modern day technology. Can you explain the processes in a little more detail that you are using for “the Astronomers Sun”?

When I go about creating an effects shot, I always try to shoot as much as possible for real in front of the camera. To me the computer is mainly for solving the problems that can't be solved during the shoot, making subtle enhancements to the shot, or for use as an affordable optical printer. The way I see it, modern day off-the-shelf editing and effects software actually make traditional effects techniques an affordable and practical option to those who don't have millions of pounds in the budget. Yet the software usually seems to replace the traditional techniques. Of course, there is a lot of skill involved in effectively using programs like Maya or After Effects to create a shot from scratch but I think it is usually a less creative and interesting option that often makes for a pretty sterile and lifeless effects shot. I'm mainly inspired by old school effects maestros like Derek Meddings and I try to think "how would they do it?" If you do that then you have an organic and slightly random look to the shot. For example, the comets in the Astronomer's sun could have been created using CG particle effects but I actually created them by shooting falling salt, which was then colour corrected and composited in After Effects.

For the opening shot of the film, where the camera tilts down past the stars and settles on a view of the observatory, we shot the camera move for real frame by frame. I felt the fact that we were doing this camera move frame by frame was an opportunity to shoot two passes - a matte pass and a beauty pass - and that would give up a really good quality composite superior to just keying out a green screen. However getting the two pass method to work without motion control was much more difficult than I imagined and it required everyone to put on their thinking caps to figure it out. We eventually got it to work and used the frontlit/backlit process, which Douglas Trumbull used on films like “Star Trek: The Motion Picture” and “Blade Runner.” I'm chuffed we got that to work because it gave a really high quality matte for compositing. It's going to be a very useful technique for me in the future if i ever find myself shooting model space ships and things like that again. 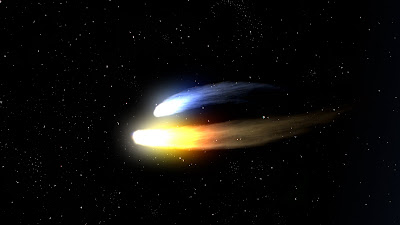 Practical Special Effects are a very specialized area in animation. What got you interested in them?

I think it all started when I was about three and got hooked on “Thunderbirds” and the other Gerry Anderson programs. The show had all these really cool planes, space ships, machines, spectacular explosions, crashes and rocket launches galore. It really was everything a young lad could want in a TV show. I was never really that interested in the puppets; I just wanted to see the next cool aircraft or explosion. Some of the designs by Derek Meddings were just stunning. And all of this was done with little models. Everything was done for real. Every last thing you saw on the screen was real and crafted by hand. I still look back at the shots now and they are stunning. The amount of care and attention to detail that went into those model shots was unbelievable. It was all done at a time when nothing like this had ever been attempted before. At a very young age I did get pretty obsessed by it, so I think it was that that really set me of on my way.
It just kind of carried on from there, most of the films or TV shows I got really interested in had these model effects shots. Star Wars, Ray Harryhausen films, James Bond films, Superman etc, and when I was older films like 2001: A Space Odyssey. At the time, I had no idea how they did things. I found it all so fascinating. I looked at these special effects guys as geniuses, and still do think of many of them in that way.
I got the opportunity at James Watt College, where I was studying Graphic Design. In our last six months of the course we had our "personal project." I wasn't feeling that inspired to create graphic designs and technically we were also allowed to make a film or animation so I opted for that. This gave me the chance to create the kind of special effects I always thought I could create in my back garden and garage, and I worked on it pretty obsessively for six months. By the end of it I had nine minutes of effects shots showing a space ship on a voyage to Mars and back, and I put it out YouTube. When I came to study animation at ECA, people gradually got to know about my home made space film, and I started getting requests to do model effects for people. And now here I am doing what I've always wanted to do on this beautiful film "The Astronomers Sun."

You must be busy with all of your studies. What’s next after “The Astronomers Sun”?
I'll have a few college projects to keep me busy for the rest of the year, and I'll also be starting to turn my attention to my degree film. I’m really looking forward to getting the chance to make a film of my own again. I’m not completely sure what I’m going to do yet but I've got an idea forming in my head that will take my work back into space again.

You can view more of David’s work on his webstie
http://www.davidross-sfx.com/
Posted by David Bunting at 04:35